Happy 4th of July everyone!  Here are some beautiful fireworks over Chicago to get you through until tomorrow…

Today, I decided to do something I wanted to do for such a long time – make homemade puff pastry.  In class, I LOVED making croissants – seeing the multiple layers and the flakiness of the end product made all of the hard worth it – and made me amazed at my own abilities!  Puff pastry has even MORE layers in it than croissant dough, so I was eager to jump right in and try to impress myself again 🙂

This puff pastry was made to use for some turnovers that I’ll post about tomorrow – but I thought that this would be too much to post about in one day!

Puff pastry is something that does require a lot of work and takes a long time – although most of the time is letting the dough relax between folding.  The recipe I used is from my first-quarter schoolbook (Professional Baking by Wayne Gisslen) – super simple, just a lot of work to do!

Put the flour and salt in a bowl and mix.  Make a well in the middle of the flour mixture.

Pour the melted butter and water into the well, and mix with a spoon until a dough starts to form.

Once you reach this stage, turn the dough out onto the counter and knead by hand until a cohesive dough is formed. 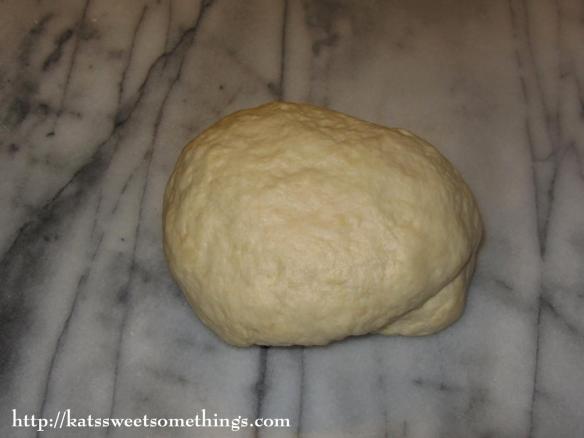 Wrap the dough in plastic wrap, and let it sit in the refrigerator for a half hour to relax, so the gluten can develop.

When you remove the dough from refrigerator, turn it out onto a lightly floured surface.  Take a rolling pin, and roll it out into a long rectangle.  You want this to be as exact of a rectangle as possible, so what I did was take a ruler and repeatedly push it up against the edges of the dough to ensure that I had straight edges all the way around.

Your next step is to take the second amount of butter and put it between two sheets of parchment or plastic wrap.  Then take out your aggression and BEAT THAT BUTTER!  For real 🙂  Go ahead and pound on the butter to soften it up.  After you have softened it, start doing the same thing you did with the dough, and shape it into a rectangle – you want this to be around 2/3 the size of your rolled-out dough.

Then you need to take your butter and flip it out onto your dough like so.

After this you want to take the empty side of the dough (in this case on the right side) and fold it over the butter.  Use a pastry brush, bench brush, or paint brush (only used for baking of course!) and brush off the excess flour.  Then take your left side and fold it over (carefully, because you are folding the butter!) so you end up with a little packet (this has been turned 90 degrees) 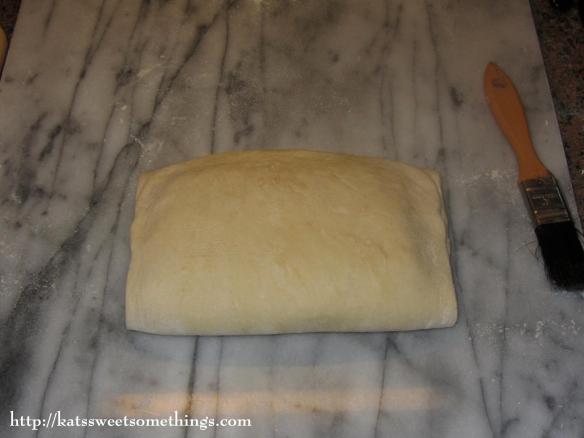 At this point you want to rotate your dough from the above position so it is rectangle with the short side facing you.  Take your rolling pin in both hands and lightly beat down on the dough, with the rolling pin parallel to the short side of the rectangle.  You want to be sure to do this with even pressure – if you hit at the dough from one side (i.e. taking the rolling pin in one hand and just wacking at it),  all of the butter will shift over to one side of the dough, and you definitely do NOT want that.

After you have lightly beaten the dough, begin to roll the dough out into another long rectangle.  This rectangle should be LONGER than the one you rolled previously – thus it should be thinner.  Be careful as you roll it, applying even pressure throughout – otherwise you will squeeze the butter out.  Just like before, use some sort of straight edge to make this rectangle as straight and exact as possible.  After your rectangle is rolled out, take the short sides, and fold them in toward the middle, like in the image below.

Before you do anything else, take your brush and get rid of all of the excess flour.  Any flour left in will give the insides a grayish look after baking (it’s not pretty!)  After this, you take this and fold it closed like a book, so you end up with something that looks like this (from the side) 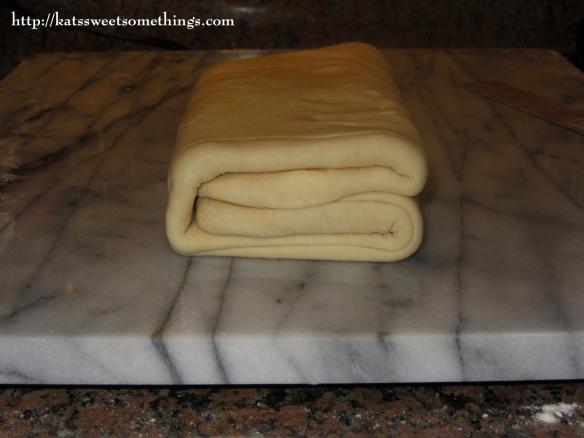 This, once completed, is called a Four-Fold.  All of these folds are what help to give puff pastry its delightful crispy layers.

At this point, you need to wrap this in plastic wrap and refrigerate the dough for at least 3o minutes.  You will need to do four four-folds on this dough, which in the end will give you 1028 layers of dough and butter (crazy, right??).  When you start each four-fold, follow the rectangle as it’s already laid out for you.  Between each four-fold, let the dough rest for 30 minutes in the refrigerator, wrapped up.

At the end of your final four-fold, you have puff pastry that is ready to use!  Check back tomorrow and I will show you the various turnovers that I made… very delicious! 🙂