Wow – it has been WAY too long since I’ve written an update (and yes, I know my last post starts the same way).

To kick start myself back into the baking (tis the season), I decided to formulate my recipe for funfetti cake – mainly because I had a groom’s cake with that cake type 🙂

For those of you who don’t know, funfetti is a great cake – basically a plain vanilla cake, but with some rainbow sprinkled mixed in to give all these little points of color within the cake when you cut it.  I swear it tastes better than regular vanilla cake… but I’m part of the funfetti generation, so I’m a wee bit biased!

The groom for this cake is a vanilla lover, so he requested vanilla with a simple vanilla buttercream.  Enter Kat – Funfetti cake with some Vanilla Italian Meringue Buttercream.  I’m excited for this cake – this was going to be my first fondant-less cake for an event. 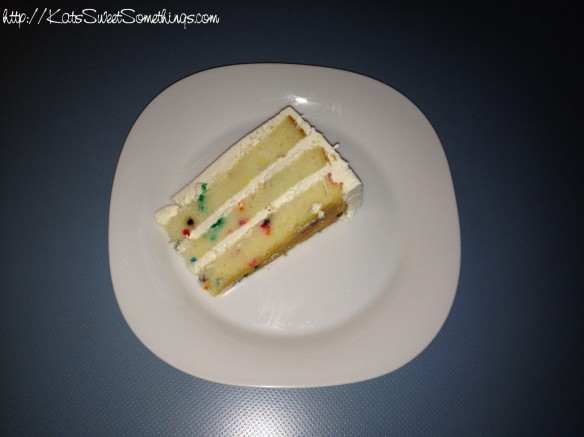 For this recipe, I started with the basic Vanilla Bean Cake that you can find here, and then adjusted it to make it lighter/fluffier, more like the Funfetti box mix that you can buy.  I will say – when cutting the layers of this cake before frosting, it was amazing how soft and almost silky feeling the crumb this cake was!  I didn’t believe it at first and kept poking at the cake with my fingers thinking it would somehow change if I poked it enough (which I’m sure would have happened… eventually a poke would have resulted in a crumbled cake, but I’m happy to say I was able to rein myself back in before that happened!)

Here is the groom’s cake I made – I had a little issue with the blue buttercream, even though it was solid colored when I put it on, after sitting for about 15 minutes it would start to marble… so I just left it as is and let the marbling be part of the cake.  The logo was requested by the groom – I guess it’s a John Cena thing (I did not know this until the day of the delivery!)

So here we go – have some Funfetti for your next fun event!

Preheat the oven to 300° F and grease/flour two cake pans.  Cut a parchment circle and place in the bottom of each cake pan.  Set aside.

In a medium mixing bowl, whisk together cake flour, baking powder, and salt to combine and set aside.

Add the butter to the bowl of an electric mixer. Using the paddle attachment, beat on medium-high speed until light and creamy in color (approximately three minutes).  Scrape the sides of the bowl and continue beating for an additional minute.

Mix 1/4 cup sugar into the butter mixture and beat for one minute; repeat until all sugar is incorporated.  Add one egg at a time, mixing and then scraping down the sides of the bowl after every 2 eggs addition.

Whisk the buttermilk and vanilla extract in a liquid measuring cup.

Add in the sprinkles, and mix until they are scattered throughout the batter.

Split the batter between your cake pans.  Bake approximately 60 minutes, or until a toothpick inserted in the center comes out clean.  Cool in the pans 5-10 minutes before transferring to a cooling rack to cool completely.  Bake remaining batter, as necessary.